By Martha Mintz (The Furrow)

The Great Plains—especially the Western states and provinces—certainly put the “dry” in dryland farming, making moisture chief among reservations for those considering cover crops. An increasing number of adventurous dry-land farmers have found those concerns to be largely unfounded and are pushing forward to glean ever broadening beneﬁts from cover crops on their farms.
Derek Axten, Minton, Saskatch-ewan, gets a scant 12-14 inches of precipitation on a good year,yet considers cover crops to be a critical cog in his diversiﬁed farming system.

“I was concerned growing a cover crop would use up moisture I could have used the next year to grow a cash crop,” he says. “ What I found instead is if you don’t use it, you’ll lose moisture to evaporation anyway. With a cover crop, I’m putting more carbon in the soil and eﬀectively creating a bigger sponge to hold even more water. Every time I grow a cover crop, I’m happier with the crop I grow the next rotation than I am with a crop that didn’t follow a cover crop.”Axten must not be alone in his revelation. Despite concern, cover crops are inching their way West across more and more acres, including those categorized as semi-arid in years when it does rain. North 40 Ag in Ballantine, Montana, has seen their growth as a cover crop seed provider take a steep trajectory since starting in 2011. They re-port plenty of their seed is ear-marked for dryland acres yielding successes to report.

Kate Vogel and her husband, Marcus, started North 40 Ag after experimenting with cover crops on Marcus’ family’s 50/50 dryland and irrigated Ballantine, Montana, farm. Kate had a years-long head start with cover crops having focused on dryland no-till systems while earning her master’s degree in agronomy and then working as a Montana NRCS agronomist promoting cover crops and soil health. 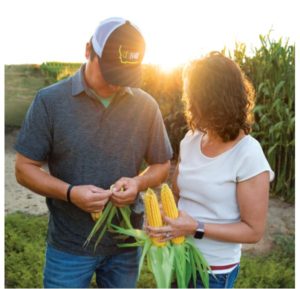 “When I was at the NRCS, there was a lot of excitement about cover crops, but adapting them to Montana’s climate was a concern,” Kate says. She was able to work with Montana growers on test plots designing mixes, ﬁguring out timing and executing rotations. “I had my big ‘Aha!’ moment working with those producers on cover crops. You could see the soil changing and it was obvious we had been missing a whole leg to our production stool.”Eight years later, Kate applies the knowledge she continues to build to help customize cover crop plans for the family’s farm and others in the region. She’s seen dryland cover crop users initially concerned about wasting moisture emboldened to be more aggressive with covers and diverse and inno-vative in their goals. They have growers using cov-er crops to potentially mitigate acidic soils without reverting back to tillage, to attract pollinators and beneﬁcial insects, to act as biofumigants to suppress pest species, and to decrease inputs including fertil-izer and weed, pest, and disease control.

“They say the best time to plant a tree is 20 years ago but the second best time is today. I wish I had started planting cover crops 20 years ago, but there’s no time like the present to get after it,” says Roger Solberg, a Malta, Montana, farmer who raises small grains, pulses, saﬄower, and ﬂax on 3,400 dryland acres, which have endured extreme drought the last few seasons. “I wish I hadbeen a lot further along in my cover crop program with these dry years because as you build your soil health you insulate yourself against drought.” Solberg ﬁrst tried cover crops during a very wet year. He was shocked to watch his soil organic matter jump from 1.8% to 2.5% after just one year of seeding a diverse cover crop mix in place of fallow. That more than doubles his soil’s water and nutrient holding capacity. “I’m not going to say soil organic matter is going to build that fast every year. We just had a great year and were able to see signiﬁcant changesn our soils,” he says.

Despite dry years bringing failure to cover and cash crops alike, he’s pressing on. He reasons the 7 inches of rain he might get on chem fallow would largely be lost to runoﬀ and evaporation. With a living cover crop and improved soil structure, water from snow and rain instead soaks in and is insulated from evaporation. “I’m recycling more of that moisture through the growing plants while increasing soil water storage by building carbon and soil life.” Vogel has noted on many occasions she emerges from cover crop ﬁelds with wet boots even in the heat of summer. “ You’ll see the large leafed plants in the mix accumulating and absorbing dew, which to me says they’re capturing moisture that isn’t nec-essarily falling as precipitation. Also, we have roots pulling moisture from all different depths. We haven’t seen moisture is-sues ourselves with cover crops.”

The Vogels have moved to continuous cropping with strategic residue-building rotations resulting in one of the best dryland corn crops the farm had ever seen in 2018. It was a good rain year, but their previous standard yields were less than half the crop their once very marginal dryland acres produced in 2018. Kate jokes it might have been even higher if Marcus hadn’t picked so many ears happily checking the corn all season. Axten also has a highly diverse rotation, even intercropping cash crops such as canola and yellow peas with yields exceeding monocultures. His dedication to building his soil health through diversity and cover crops was proven a moisture saving win in 2017.

In 2016 he seeded a 4-ton biomass cover crop which he grazed in the fall. Winter yielded very little snow and 2017 proved brutally dry with only 1.5 inches of rain falling the whole season. “In June I dug in that ﬁeld and there was moisture at the surface where there shouldn’t have been. It had to be because of the increased surface residue protection and that what little snow and rain we did get had followed the root channels into the ground,” he says. It was one of the highest gross margin crops on his farm that year.

A challenging aspect of cover crops is how wildly theiruses and successes can vary from farm to farm. The Vogels lean hard on education, experimentation, and cus-tomization to help more producers get the desired results.

Many dryland customers use cover crops in place of fallow or as part of an extended rotation. “A producer may use a wheat-wheat-corn-sunflower-cover crop rotation having a cover crop on the field only once every 4 or 5 years as a diversity booster,” Kate says.
Mix and seeding recommendations will vary significantly based on rotation, soil type, soil acidity, equipment type, and goals. Grazing is one of the best ways to put a dollar amount to the benefit of covers, though there is no universal grazing mix. Even that recommendation is based on when it will be grazed, animal species, animal age, calving dates, and more.

The Vogels maintain plots, host mul-tiple field days per year, and hold winter round-table discussions to help crack the dryland cover crop formula.“A lot of people get the general big concepts of cover crops, but it’s how to implement it that becomes the problem. It’s more or less a personal recipe in every case. Our goal is to help implement a strategy so farmers can be successful and not just quit,” Kate says.

Axten has no intent of going back. “I know in a moisture-limited environment I have to make every drop count,” he says. “I used to think covers would be a detriment, but now I see them as a vital piece of my operation.” ‡